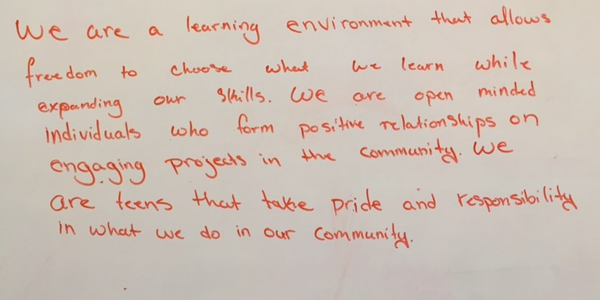 Fridays are our community engagement day at LightHouse; a day that we are out and about in our neighborhood, getting involved in long-term projects and building relationships. These first two Fridays have been spent with the teens brainstorming ideas and building plans for our fall project, working to rehabilitate a neighborhood park one block over from LightHouse.

Watching the process unfold these past two weeks has been, for me, such an illustration of the power of learning by doing. In just two Fridays we have seen teens utilize and skills including brainstorming, planning, writing, presenting, research, and even political analysis. And it’s all a natural consequence of a group learning process.

Take, for example, the very idea of rehabbing a local park. After visiting the park, students brainstormed all of their ideas for what could be and what they’d like to see. This led to a conversation about how to involve those who live in the area and have used the park (or not) for years–understanding the importance and necessity of planning with communities, not for them. From here, teens developed a petition to share with our neighbors, asking for their support in approaching the City for permission to work on the park.

As teens went out and about and started meeting local business owners and residents, they also started collecting feedback–about what was and what was not working in their approach. We came back together as a group, debriefed, and revamped our approach based on their observations and what they learned from their conversations in the neighborhood. Their process naturally included the steps of brainstorming, planning, executing, and revising, without them ever being told to do those things.

They also decided to write a piece about LightHouse to share with people they met, to introduce our neighbors to us. They put the piece together as a group, and it’s more powerful than anything that we could have written for them. Because it’s in their voices. It’s their ideas. It’s them deciding how they want to present themselves to the world. And it was inspiring to watch unfold.

Most importantly, this whole approach was not dictated. We didn’t design a process for the teens to participate in. It emerged naturally from a set of group discussions. Learning doesn’t have to be designed, forced, or coerced. Rather, it happens as a natural consequence of life. As staff, we work to foster, support, and encourage, not to require. It creates an environment that is authentic, inspiring, and, hopefully, empowering. Plus it’s just plain fun!