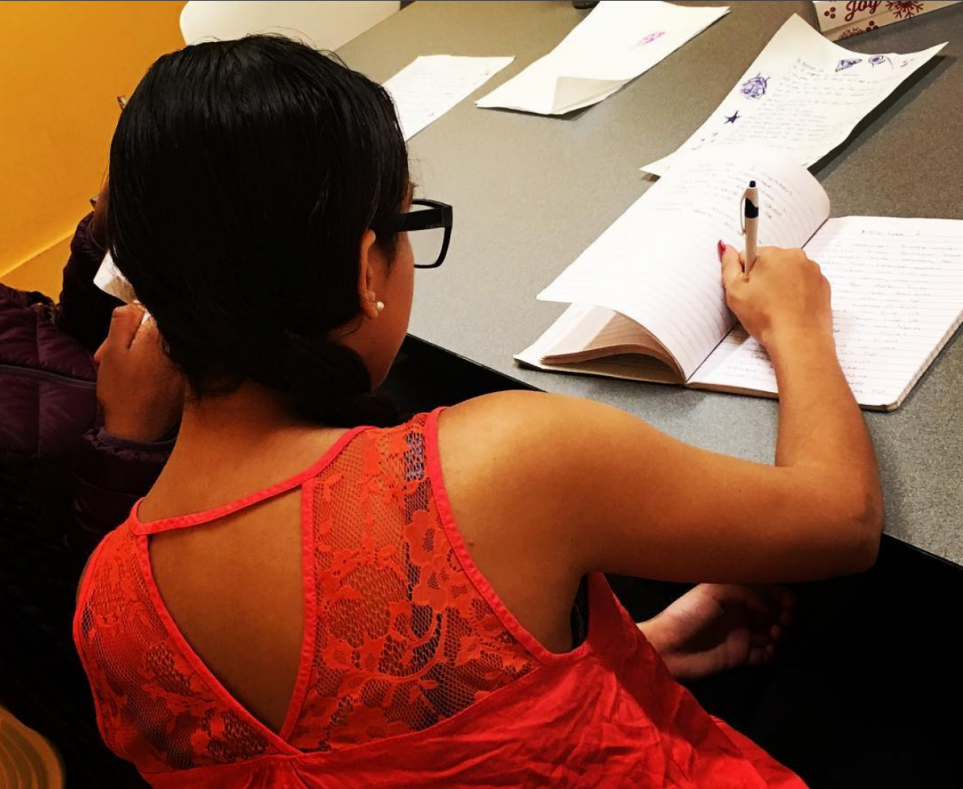 This post was written by guest blogger–and LightHouse teacher–Amelia Sawyer.

Over winter break, as I reconnected with family and friends who I see less regularly, I found myself telling everyone who’d listen how much I love teaching at LightHouse. While we sat around, eating and watching snow fall and eating some more, I’d describe this special place’s warm, open environment, the genuinely interesting classes, and the supportive connections I see young people making among themselves. At each new gathering, I got better at describing so many of the things about this wonderful place that I find most exiting and rewarding however I always got stuck on the one element which, for me, surpasses them all. How do you describe to someone who has never worked with or parented teens how truly exceptional it is to find a place where young people from such a broad range of backgrounds can all find the motivation and support to invest in themselves? How can you convey what it means to see, again and again, young people taking these first solid steps towards adulthood in a way that feels right to them?

By chance, in preparing for the first class of my History of US Activism course I learned about a great metaphor furnished by activist and Nobel Laureate Wangari Maathai in her essay “Speak Truth to Power.” A little background here: Maathai began her career as an activist when she started the Green Belt Movement, a Kenyan organization of women that has planted tens of thousands of trees to address the environmental and economic trouble Kenya was facing after serious deforestation. Maathai discussed the way in which individuals used simple methods to create huge national positive change, all because they initially decided to work towards solving problems rather than just blaming a failing, ineffective system. Using an analogy of busses, Maathai talks about “wrong bus syndrome,” in which people come to realize that the “bus” they are on, or the system in which they’re placing their trust, just isn’t right for them – it’s going toward the wrong destination. The first step in correcting this “wrong bus” problem is to make the decision get on the right bus, and this brings me back to LightHouse.

I imagine everyone reading this post knows that each teen at LightHouse is the focus of a great deal of enthusiastic adult support; beyond this, LightHouse’s unique structure also gives each young person what they need to become supportive of themselves. As teachers and advisors, we can tell a student they’re on the wrong bus, we can give them maps of bus routes and directions to the bus station, but it’s up to them to climb those steep steps onto whichever bus is right for them. Of course, there’s lots of individual variation here; for some teens, those first steps onto the right bus might look like asking for academic help or extra tutoring, for others, it might be as simple as deciding to focus and participate during class or even just making an honest effort to attend. In my first two blocks at LightHouse, I saw one young person shift his approach to classes so clearly that he went from ignoring most of what I said in September to listening closely in December, asking on-point questions and showing true curiosity.

As I see it, LightHouse’s greatest wonder is it’s ability to show each teen what they can offer to themselves. I deeply believe in the potential of every young person at LightHouse and each day I see them begin to believe it too.